The first recipient of the full-tuition Rural Family Medicine Scholarship, Ms. Wallace is grateful for the opportunity to earn her medical degree at her dream school without incurring debt. That will enable her to pursue her interest in helping people on the Eastern Shore of Virginia, where she grew up.

“People need more providers there,” says the first-year medical student. “I want to serve people in a community I know. Since I want to go into primary care, this scholarship gives me financial freedom.”

Women’s health is her top specialty choice, followed by family medicine and pediatrics.

The scholarship was established in 2019 through the generosity of Norfolk resident Georgette Constant and her husband, Ray Gregory. News stories about the dire shortage of healthcare providers in rural areas inspired her to act. Her mother’s interest in educational scholarships also influenced her.

Medical school graduates who want to work in rural areas may take higher-paying positions in cities instead so they can pay off their loans, Ms. Constant says. Others may receive scholarships in exchange for working in a rural area for a certain number of years, only to leave when they fulfill the requirement, she adds.

“We structured this scholarship in a way that the individual who is interested in rural medicine and wants to live in a rural area is able to,” Ms. Constant says.

The recipient must be interested in practicing family and community medicine in a rural community and have a connection to a rural area, such as having lived in one or having family living in a rural region.

Ms. Wallace’s family lives on the outskirts of Onancock, about a 90-minute drive from the EVMS campus. 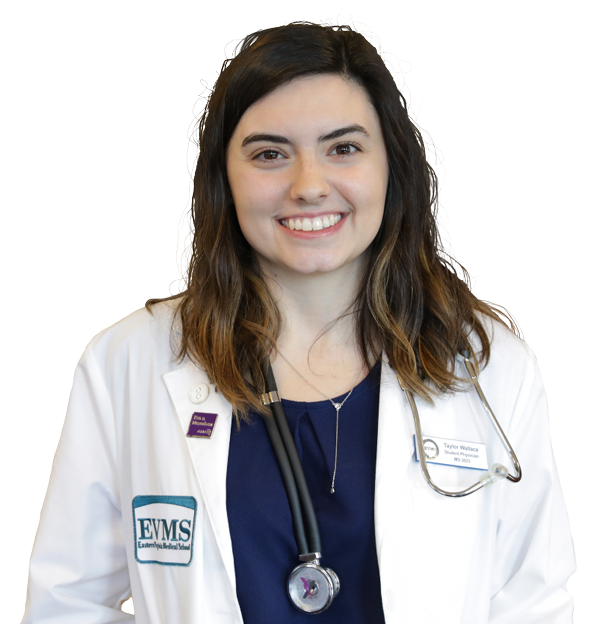 “People need more providers [on the Eastern Shore of Virginia]. I want to serve people in a community I know. Since I want to go into primary care, this scholarship gives me financial freedom.”

Ms. Wallace started thinking about a career in medicine in eighth grade, when her father had surgery. He jokingly suggested that she become an anesthesiologist so she wouldn’t have to talk to the patients. “I was pretty shy,” she says, chuckling.

In high school, Ms. Wallace participated in a nursing program for a semester and enrolled in an anatomy course, which she loved. She realized she wanted to become a doctor — and attend EVMS.

She applied for a scholarship to EVMS but found out just before starting medical school that she hadn’t received it. Instead, she was awarded the first Rural Family Medicine Scholarship. She was overjoyed to learn she would not need to take out big loans, especially since she had college loans to repay.

She already has thousands of hours of experience in women’s health and rural family medicine. She gained work experience as a Riverside Medical Group Scholar while at CNU. She worked as a medical scribe with Eastern Shore Rural Health during the summers of 2018 and 2019 as part of a pilot scribing program.

Ms. Wallace would like to help expand EVMS’ maternalfetal medicine services to the Eastern Shore. Many pregnant women on the Shore are referred to EVMS for prenatal care, she says. Some may not have the time or resources to travel to appointments in Norfolk, which requires paying a toll to cross the Chesapeake Bay Bridge-Tunnel.

Because Ms. Wallace wants to practice in southeastern Virginia, she thought attending EVMS would give her insights in to the surrounding community. She also chose EVMS because of the campus community the school has fostered.

As a child, she became familiar with EVMS when she accompanied her cousin to appointments for his Type 1 diabetes treatments. Later, during campus visits she received warm welcomes and observed happy students laughing and smiling with classmates.

“Every time I went to EVMS,” she adds, “I felt like I was coming home.”

To join Ms. Constant and

Mr. Gregory as well as countless

others in establishing scholarships,